Check status of your bid on Subscan

+ Robonomics Pioneer NFT for all contributors

Robonomics will be onboarded in ~2 weeks

We will focus on Kusama apps for IoT startups and smart home infrastructure, read more here

Monthly IoT subscriptions for your home infrastructure will be available before end of the month with start price 0.5 XRT. Have a look on example 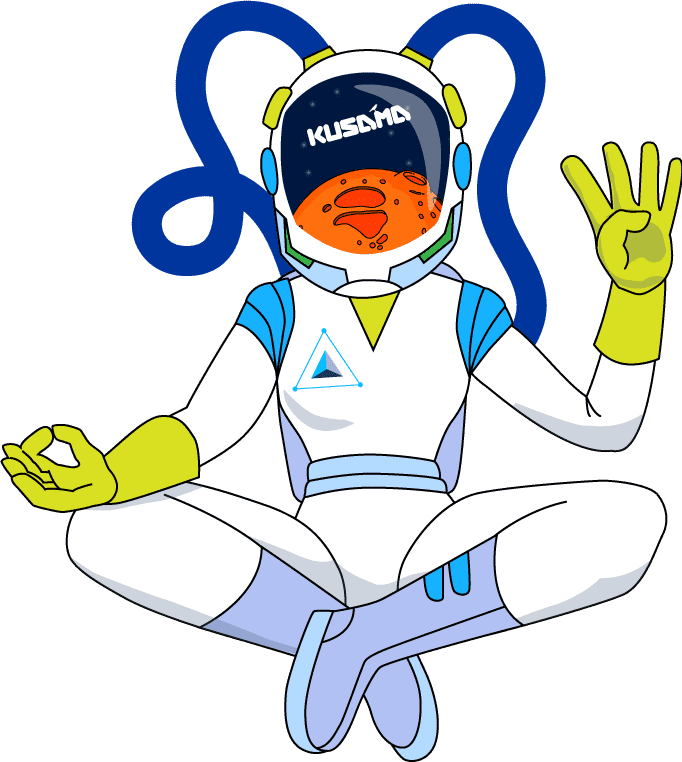 Robonomics is an open-source platform for IoT applications. We support a new generation of internet technologies (web3) that implements the exchange of technical and economic information in the form of atomic transactions between user applications, IoT services, and complex robotics.
The Robonomics project is over 6 years old. We started to prepare for the first experiment demonstrating human-machine communication using an independent decentralized provider network in 2015, from the early days of the Ethereum network. By early 2021, the project team managed to create a techno-economic machine communication protocol running on top of Ethereum and IPFS, and complement it with elements of a cloud-based IoT platform based on the Polkadot parachain.
Robonomics contains a complete set of tools for developing IoT applications, both on the robotics and the user interface sides. Communication between the user and device happens using the most successful technologies from the Web3 world – IPFS, Ethereum, and Polkadot. Thus, developers can create modern and secure applications for Smart Cities and Industry 4.0.
We are launching Robonomics Web Services. This sustainable subscription model for IoT devices makes possible to execute zero-weight transactions in blockchain.
Email updates 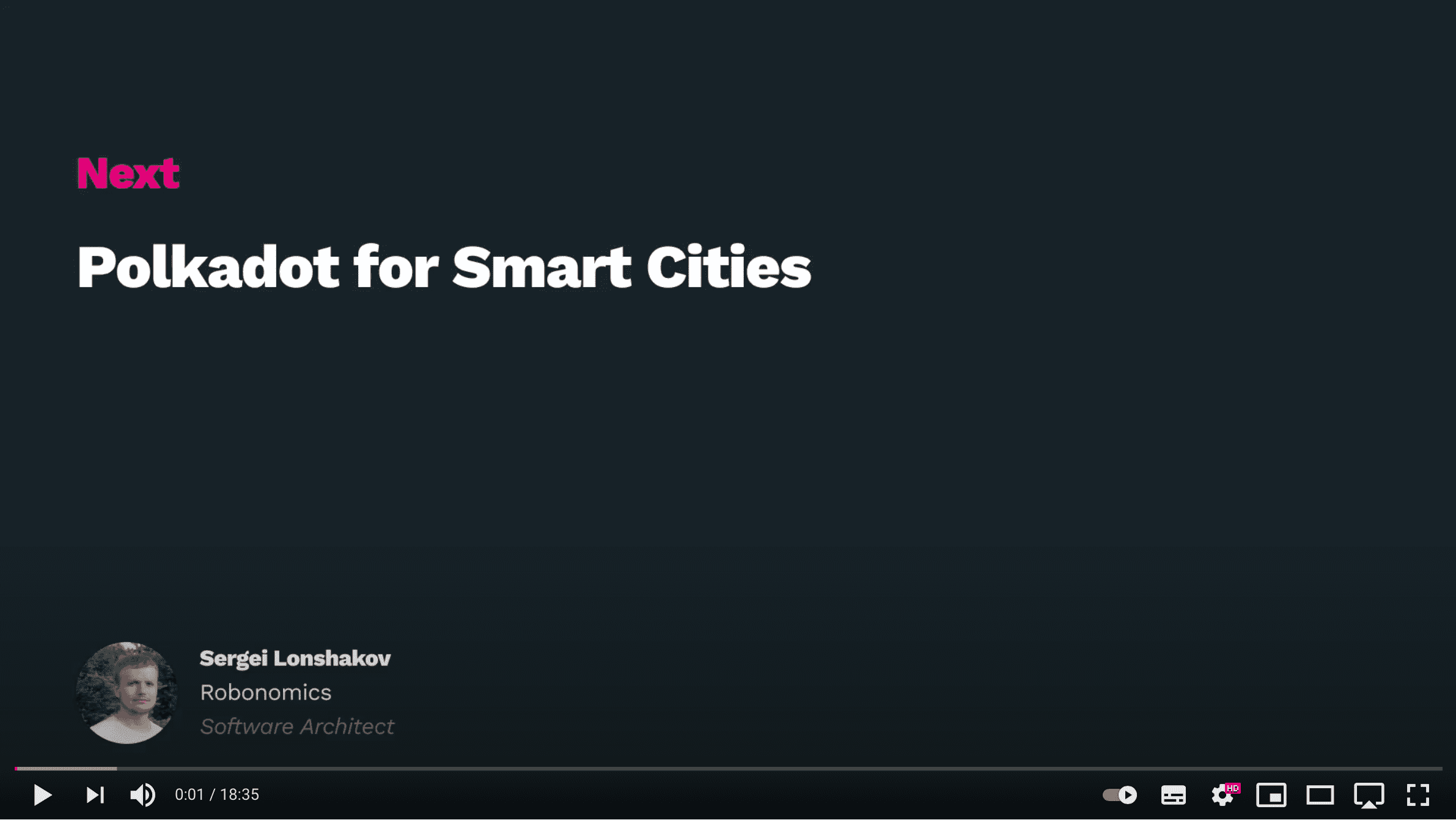 On May 19, on the main stage of Polkadot Decoded, Sergey Lonshakov spoke about the concept of Smart cities and Polkadot services that are possible within this. 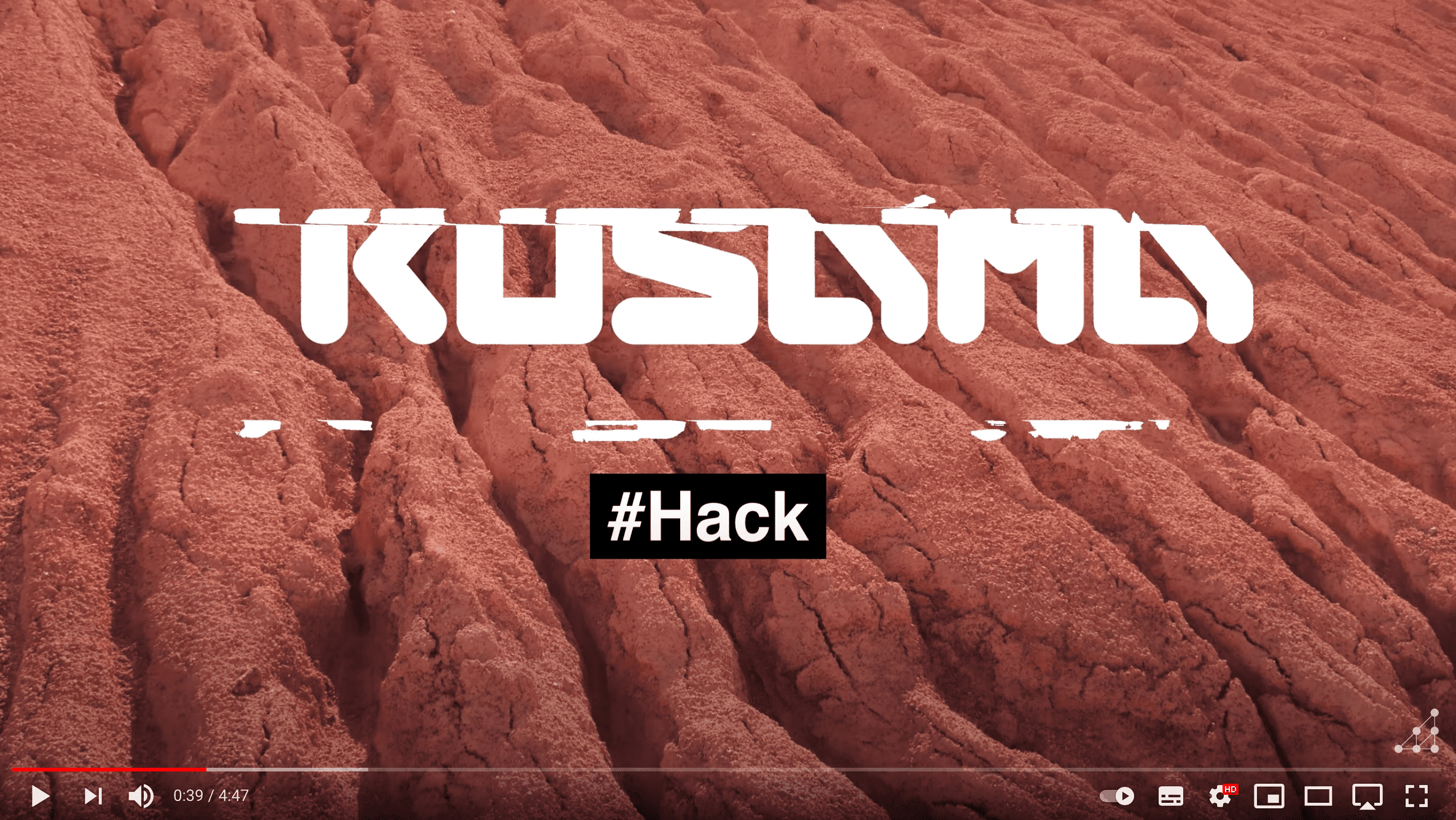 On Hackusama (a 7-week online hackathon) we inspired with an idea of architecture impossible without KUSAMA. Watch the video and read in the description what was done during the hackathon. 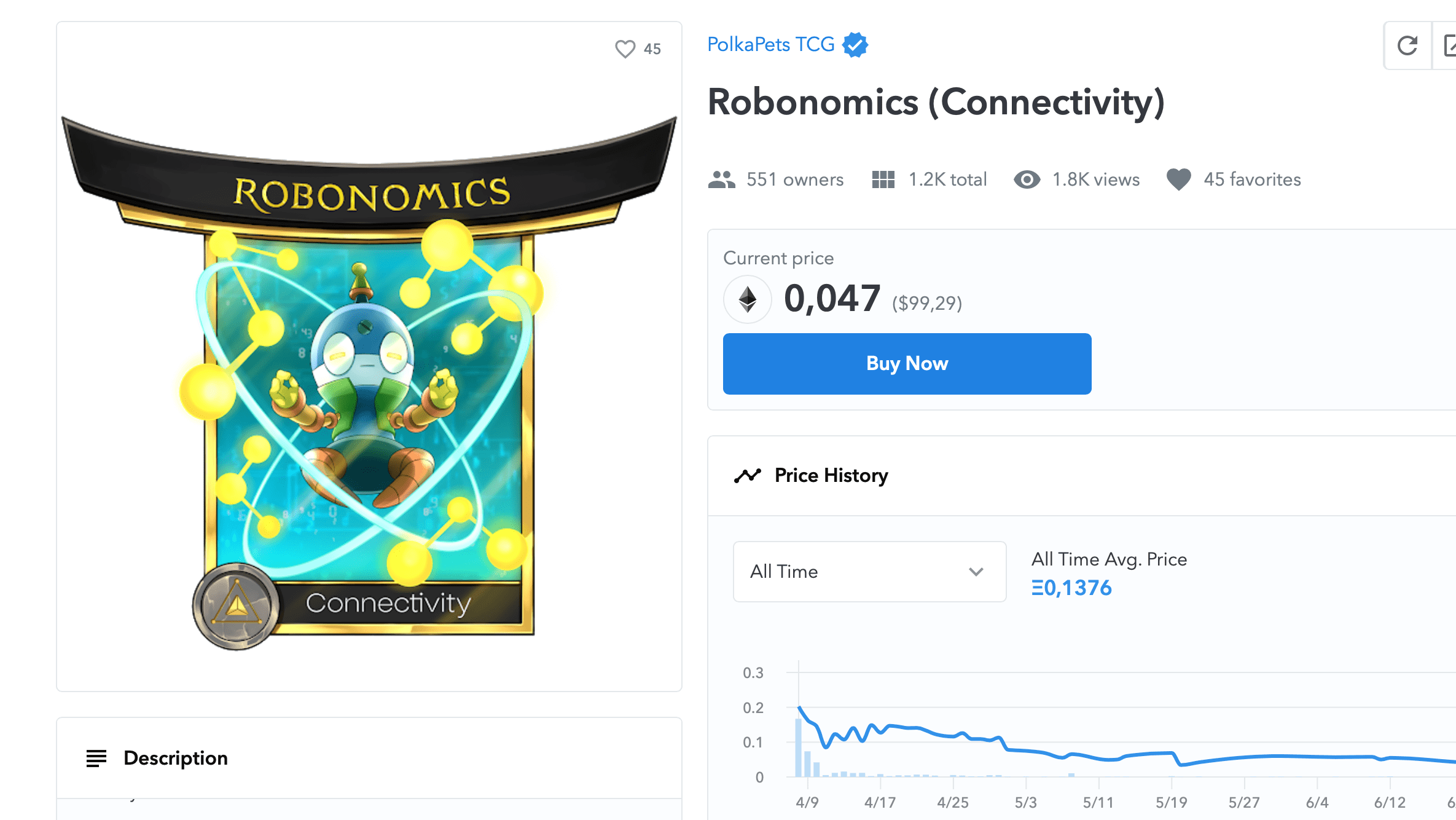 PolkaPet is collectible NFT card embodied as an artistic creature, represents a specific project within the Polkadot ecosystem. Robonomics PolkaPets owners can get some additional bonuses.

Kusama parachain is great opportunity for Robonomics to scale network up to 1 million IoT systems connected in real-time without any centrilized regulators.

The Robonomics developers team formed plan for 2 years within Kusama slot. We will try to build on our existing work and new software development 5 specific features, including:

Recoup your investment in the high-value robots by renting out it with a mechanism for tokenizing robots’ labor.

Robot as a Service (RaaS)

Get and provide direct robot services without cashiers, clerks or centrilized cloud providers. 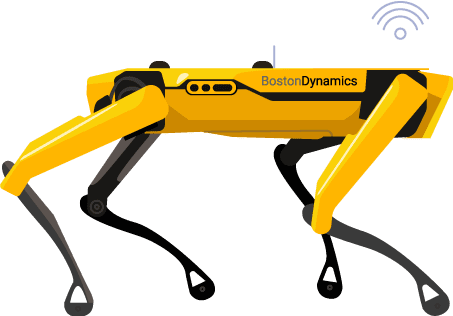 Robot as a Service 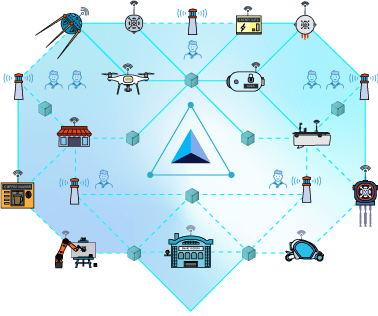 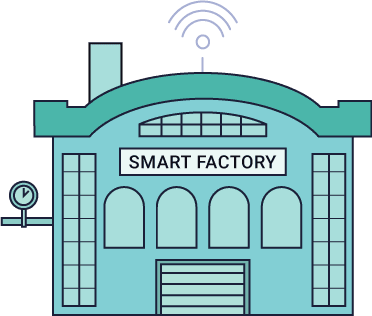 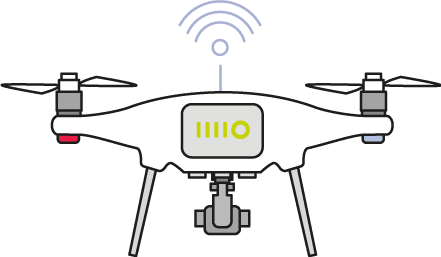 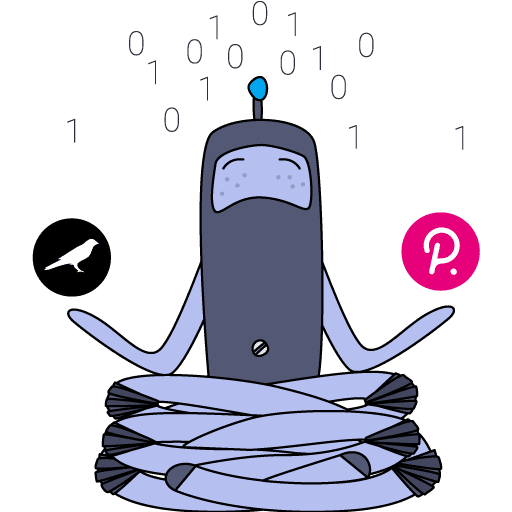 Robonomics PLO may be interesting for stakeholders who are looking for ways to diversify their KSM stake next 48 weeks inside the ecosystem. XRT for now is available on Uniswap, Huobi, and in addition on PancakeSwap. 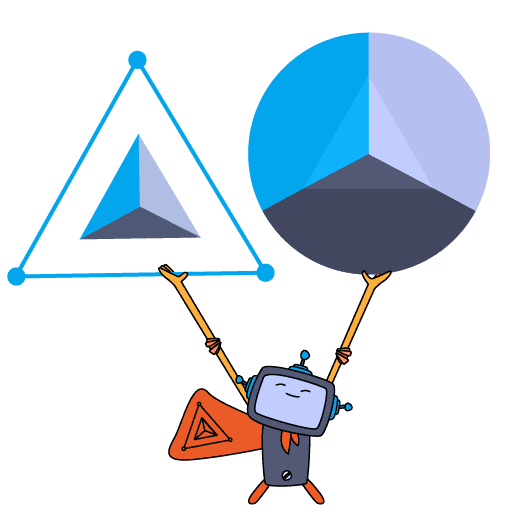 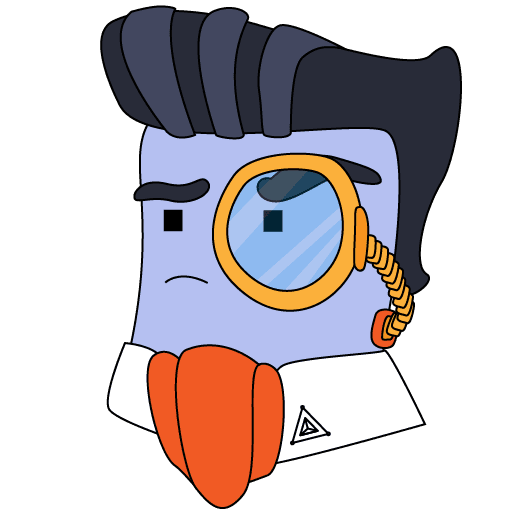 Robonomics already has complex ecosystem for connecting real world to Web3 Technology Stack. It's free, it's opensource, everybody can try it for IoT and Smart services. With Polkadot it can be even more cost-effective.

Roadmap of the Robonomics parachain

In 3 months after the Robonomics parachain launch, Robonomics developers are going to activate the core functionally that’s been developing during 2019-2021, and also supplement the network with modules that have proven themselves in the Polkadot and Kusama ecosystems.

Update 1.1 Staking and allowing transfers (0 - 1 week). Will allow you to transfer XRT and stake your XRT with a 10% APR for all token holders and 50% for Crowdloan participants.

Update 1.2 Treasury and Technical committee (2 - 3 week). Will allow transferring a share of the DAO funds from Ethereum to the parachain. The Technical Committee can produce emergency referenda. These are used for emergency bug fixes or rapid implementation of new but battle-tested features into the runtime.

Update 1.3 RWS (4 - 5 week). Will allow using IoT management functions with not only commission payments in XRT but a monthly subscription as well.

Update 1.4 Robot-as-a-service (6 - 7 week). Will allow to implement a control process for the provision of automated services and use payments within transactions to launch devices.

Update 1.5 XCMP functionality and Robobank (8 - 9 week). The solution is based on the Polkadot XCMP architecture that will allow any parachain to get access to IoT device management with payment in a native token.

Update 1.6 Democracy and Remove Sudo (10 - 11 week). Developers won’t have the ability to interfere with the operations of the network without the involvement of the technical committee or voting of parachain native token holders.

2nd part of Robonomics parachain growth in Kusama designated to the launch of services based on previous Robonomics team’s R&D projects.

Globally available digital passports of products By supplementing the status of digital twins with information about the produced products, customers will be able to issue digital passports protected against changes and loss of information in the future. This use case is already implemented as a pilot at the enterprise that’s producing drones. The solution used for quality control during packaging with video recording.

Smart leasing of IoT & Robotics We’ll demonstrate the ability to use the Robonomics parachain for leasing an IoT/Robotics device. Using the example of 2 robots controlled by Robonomics parachain in 2 different industries. The first use case - an educational program based on Boston Dynamics SDK, during which developers will learn how to control the famous robot dog - Spot. The second one - an industrial manipulator sold under a leasing agreement in the United States. Both robots will provide customers with automatically generated reports at the end of the user session.

Environmental mitigation services for smart buildings with real carbon credits It will allow customers to automatically collect information about the electricity consumption of the household or apartment building, burn carbon credits, and store a report in the parachain.

Fault-tolerant civil sensors network A complete set of software modules for creating a sensor network in a city or enterprise to track the desired indicators and provide access to them without a central point of failure. Today it is being tested in one of Russian’s industrial cities - Togliatti.

Ecosystem integration updates We will focus on integrations with other parachains to expand the capabilities of IoT projects that are interested in the Polkadot ecosystem’s features.

The final task for the 48 weeks of existence in the Kusama network is the transformation of the Robonomics parachain into the Robonomics Relay Chain. This is our vision of the future of Robonomics, as a complete segment of the Polkadot infrastructure specifically prepared for working with IoT devices. 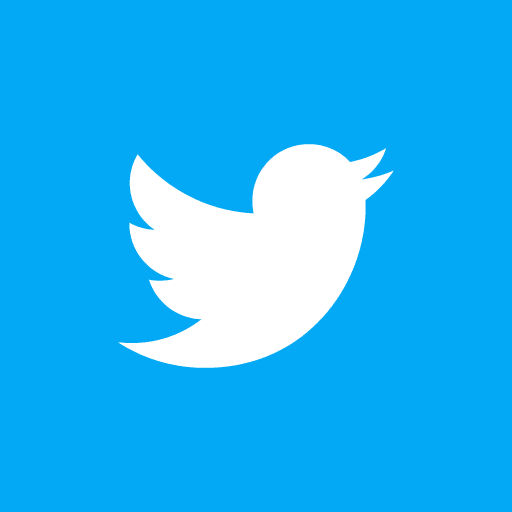 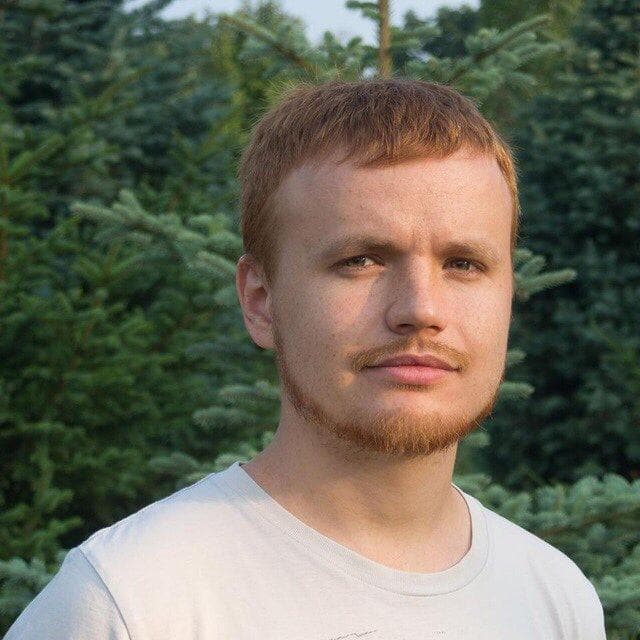 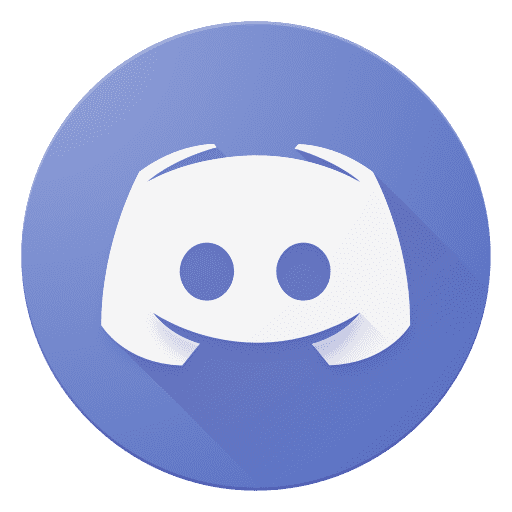