The Robonomics parachain was launched in January of this year, and our first publicly available progress report was published on January 18th in a blog post. Now, we will provide details of the work we have already performed within the task list as specified in the roadmap on Github: Tracking issue for Robonomics Parachains on Kusama Launch #145.

You can find most of the statistics yourself on the Subscan.io block explorer at: robonomics.subscan.io 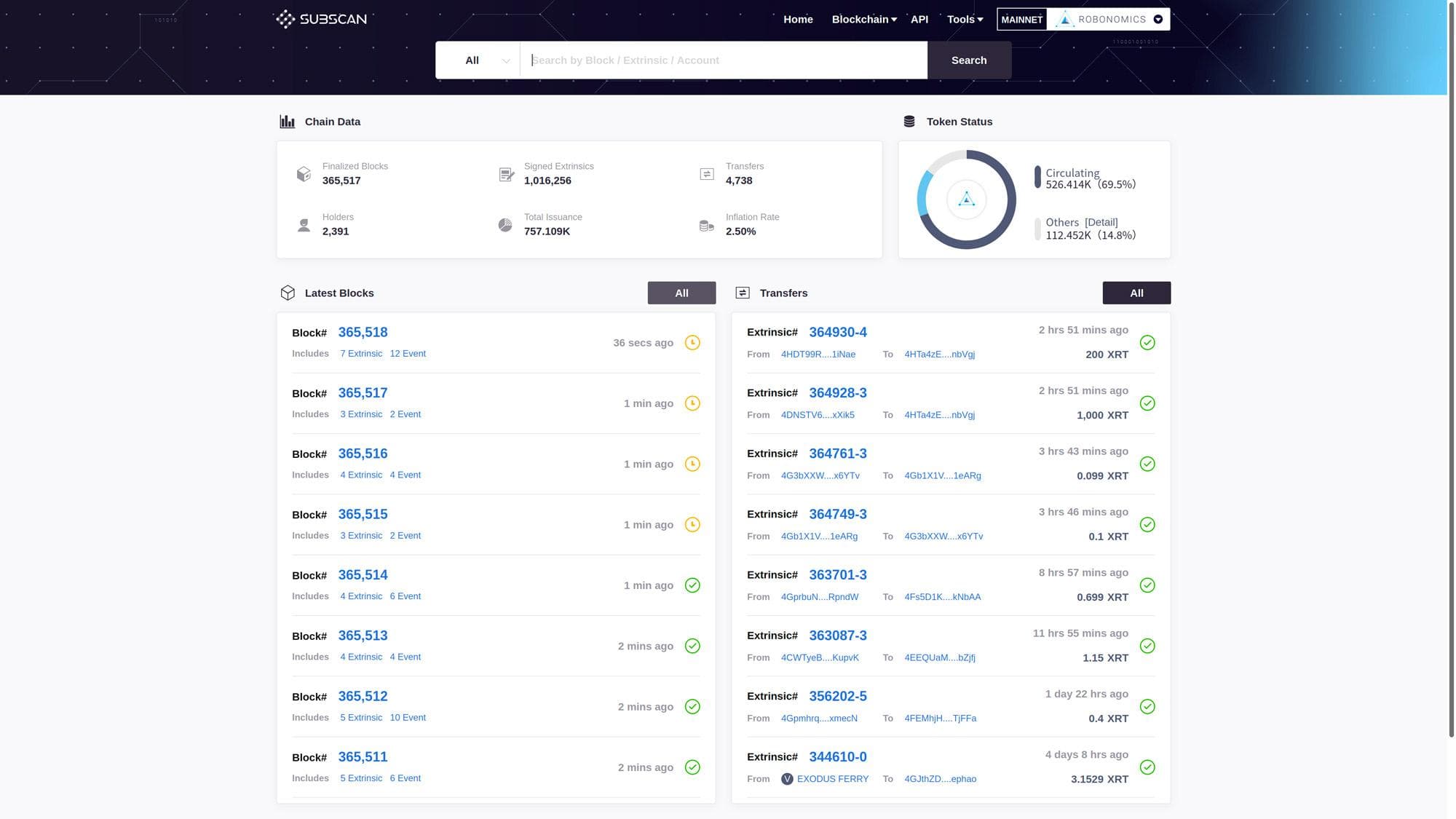 It is more correct to say extrinsics, but still we will sometimes use such assumptions for simplicity.

The daily load on the parachain today is from 10 to 25 thousands transactions per day. The datalog() function is mainly used to remotely collect data from IoT devices. Also, since February, the Robonomics developers have started using parachain IoT subscriptions for the first Robonomics scenarios of which we have been preparing for the past 2 years. 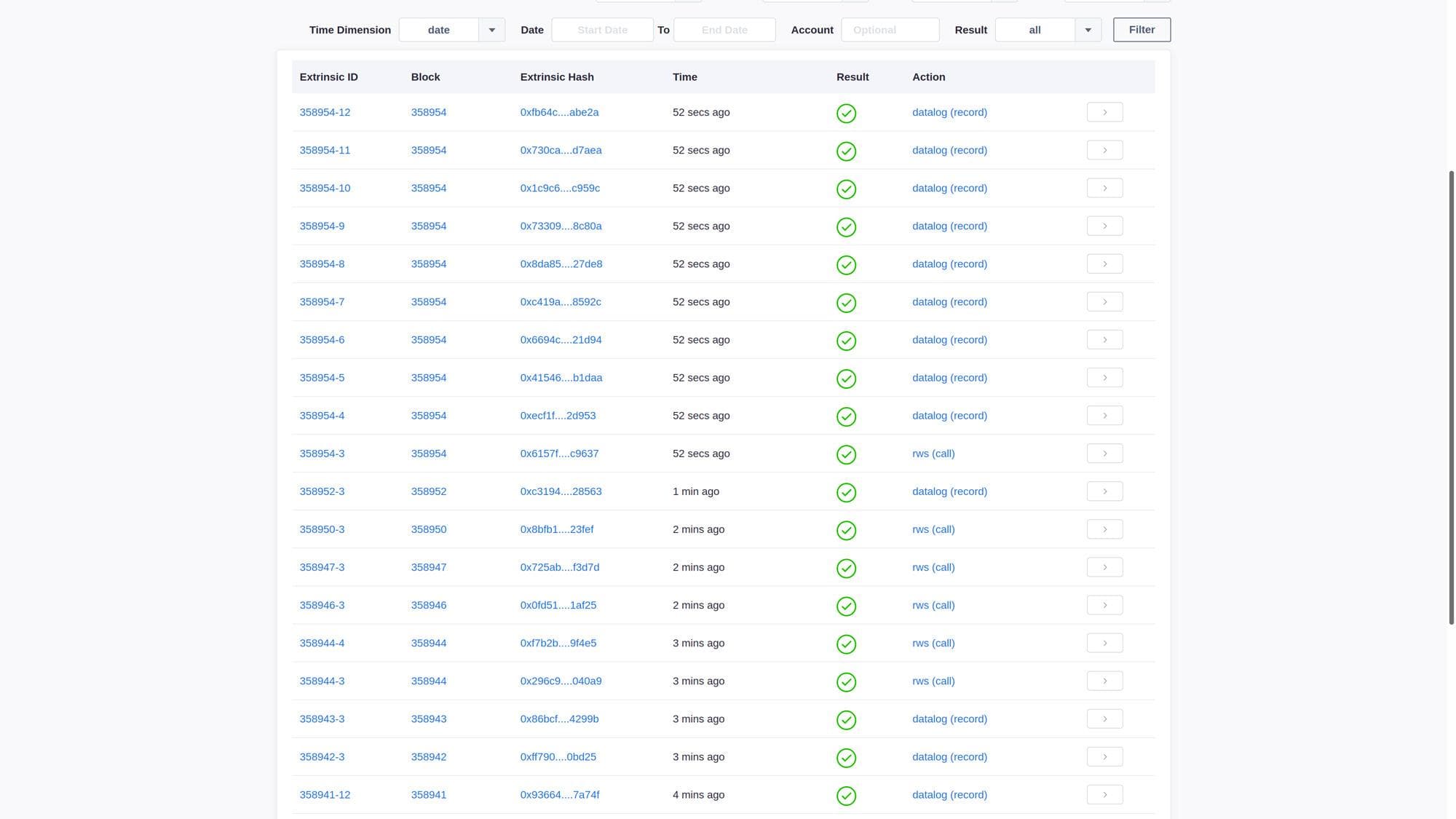 The number of full Robonomics nodes that transmit to the publicly available parachain telemetry service has doubled from 40 to 80 full network nodes. Anyone can become a Robonomics collator and receive rewards for preparing parachain block candidates and passing them to the Kusama validators.

Already in early February, we had confidence that the Robonomics parachain was ready to accept it’s first users. Engaging early adopters always involves putting a lot of emphasis on training and helping out with whatever situation an early version user gets into. It is also a search for the most patient and responsive people who are interested in the technologies we use. Yes, there are always a few of them, and it is difficult to find them in more numbers than a couple of friends and work colleagues, but this is precisely the task we face in 2022. By creating a community of web3 + IoT power users ready to experiment for the sake of education, we will be able to ensure the exponential growth of the project in 2023-2024.

The main thing we want to do to attract the first users is to develop some training courses in 2022 that will not only be useful in terms of acquiring skills, but will also be interesting to complete.

Of course, the Robonomics developers plan to organize contests and encourage the community for being active. However, we still believe that creativity/enthusiasm is stronger than the learning material we could provide. It's cool when, in the process of learning, you can try to go through a black mirror and, while the QR code on the screen changes, remember any episode of the series of the same name or a scene from Philip K. Dick's book "Ubik", in which the main character quarrels with the door, to which he owes a couple of coins... In general, one of the main tasks of the team is to maintain a creative approach to user education in the future. 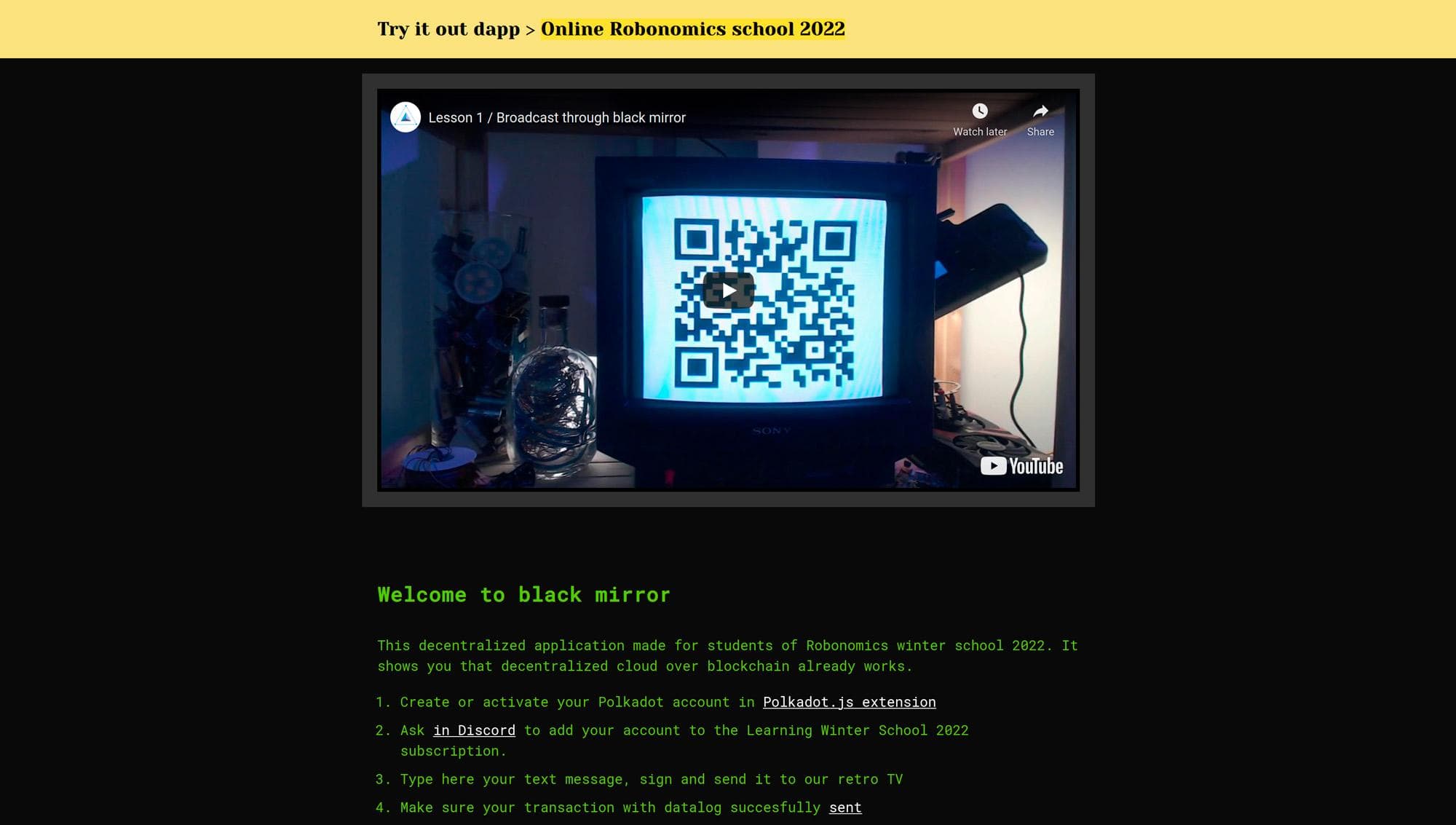 The Winter school was suspended on February 24th. Fortunately, you can still try the first lesson now! To do this, follow the link: https://blackmirror.robonomics.academy/#/

Those who have already completed the first lesson of the School in February may notice that the address of (D)app has changed. Now the lesson is available on the robonomics.academy domain, and soon all 5 lessons that we planned to conduct in the event format of the last week of February will be available online 24/7 in the Robonomics introductory course format. We will tell you about this separately.

The Robonomics releases on GitHub

Over the past 2 weeks, there have been many releases of the Robonomics parachain client. The most relevant at the time of this writing is 1.8.4.

Building the Robonomics parachain client on Ubuntu 21.10 and running without any difficulties: 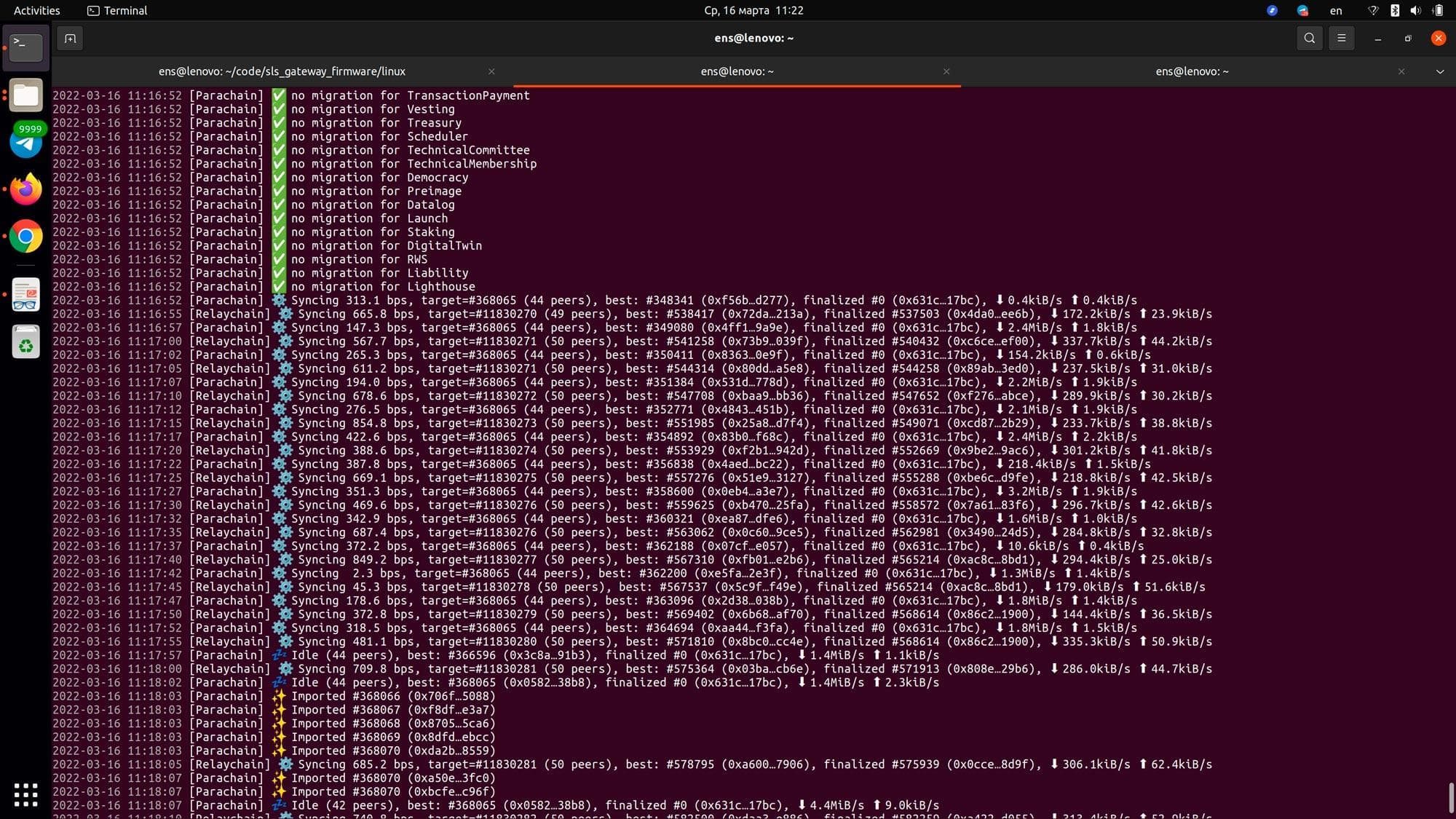 In addition to system updates in releases, it is important to note the following improvements:

You can get acquainted with all the changes in the Robonomics parachain client at the link: https://github.com/airalab/robonomics/releases

By the end of Q1 2022, the project team has completed almost all the tasks to implement the basic functionality of the parachain, and several Robonomics scenarios that previously worked only in test mode are already at the pilot stage.

As you can see from the Tracking issue for Robonomics Parachains on Kusama Launch #145, the first part of the tasks has an item related to XCMP implementation. We implemented the first tests with messaging between 2 instances of the Robonomics parachain during a master class in St. Petersburg in the fall of 2020. It is the case howeever, that in past 1.5 years XCMP has undergone many changes, and now it is more correct to say XCM (Cross-Consensus Message).

Gavin Wood introduced the first version of XCM in the fall of 2021. XCM is well covered in three articles on medium:

Already in February, we began to refine the Robonomics parachain in order to implement the first integration within the Kusama ecosystem. Our first task in this direction is integration with the Statemine parachain. This integration will allow users to use any statemine tokens to pay according to the Robot-as-a-Service model, for example, when remotely controlling a telescope in the Atacama Desert or to pay for items in a vending machine with tokens anywhere in the world.

In addition to integration with Statemine, plans for Q2 include:

We will describe each integration scenario separately based on the results of testing in Rococo, Westend or other sandboxes where Karura, Moonriver, Darwinia parachains have their own test versions.

There is complete chaos around us now, but the project team marked our trajectory for the web3 universe long ago - we publish the results of our work on the Internet so that experiments can be repeated anywhere in the world, because apart from open source code and access to the blockchain, you do not need anything more. Of course, life in the world of web3 is not so easy when it comes to a lot of details, but we can handle it. As engineers, we can imagine the consequences of militarization in the 21st century. The best thing that we all can do, with the current geopolitcal situations in mind, is to personally participate in peaceful projects and create as much open source software as possible for the tasks of ordinary people. Over the past year, our efforts have launched such projects as: an educational program for remote control of the robotic dog Boston Dynamics; remote observation of the starry sky from the most suitable place for this on the planet Earth - the Atacama Desert; civil sensor network for monitoring the quality of the urban environment in the industrial city of Togliatti; monitoring of water quality in the canals of St. Petersburg. This year we will be focusing on smart home scenarios so you can manage your home IoT infrastructure without the help of clouds.

We will share more with you in the next roadmap updates.