For Robonomics, there is still much of our roadmap ahead of us, and many things will happen for the first time.

In the world of smart and complex hardware, unlike the crypto world, the pace of life is completely different. For example, Boston Dynamics, a well-known robotics company, had more than 25 years of R&D under its belt when it launched its first fully-fledged commercial product. Another good example of simpler-looking IoT solutions: Zigbee, MQTT and LoRa protocols, but they were born back in the middle of the 2000s. Do not forget about this when looking at the history of the formation of the Robonomics project, which is at the intersection of robotics and new Internet technologies.

On our website you can see the project development trajectory starting from the first experiments in 2015: https://robonomics.network/timeline/

We will soon have our first community vote, it will be in regards as to the fate of 7 million XRT that hangs over us like a sword of Damocles today.

Having started in 2015 with the first experiments and publications on the use of smart contracts to control robots, by 2017 we had our first plan for creating Robonomics to implement additional Ethereum features for Robot-as-a-Service tasks. We then carried out the initial distribution of XRT tokens, distributing 10% of the proposed initial emission amongst the community and to the first developers of the project. 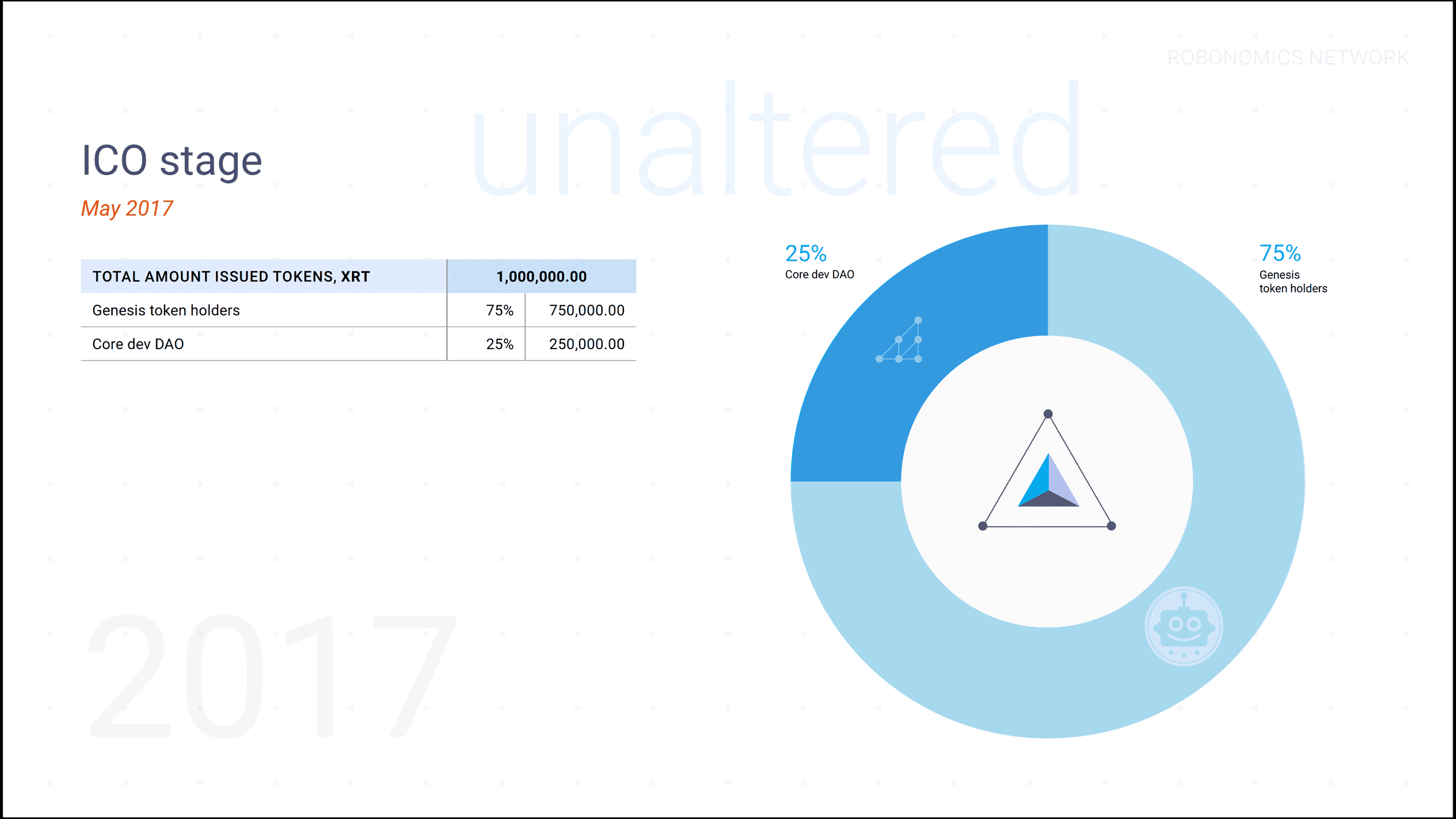 The project developers proposed to divide the remaining 9 million XRT between the DAO of developers (20%) and the community (70%), but this was to be only after the full launch of Robonomics on Ethereum, which was planned in 2018-2019.

And then the crypto winter came...

We launched the beta version of Robonomics in 2018, and in April 2019 we released version 1.0.0 of the Robonomics smart contracts.

By the end of 2018, the projects main goals were to keep the core team, and to continue working in anticipation of the launch of Ethereum 2.0, which at the time seemed realistically possible by 2020.

We decided to postpone the distribution of the community’s 70% of the XRT initial supply until the launch of Ethereum 2.0, with the belief that this event, regardless of the general market sentiment, will be more appopriate. The remaining 20% of XRT was agreed by the developer DAO to not be utilized until the community is activated, which was supposed to be around the same time as the Serenity release. In general, for us, the release of Ethereum 2.0 was the metaphorical lighthouse during the blizzard of the crypto winter. 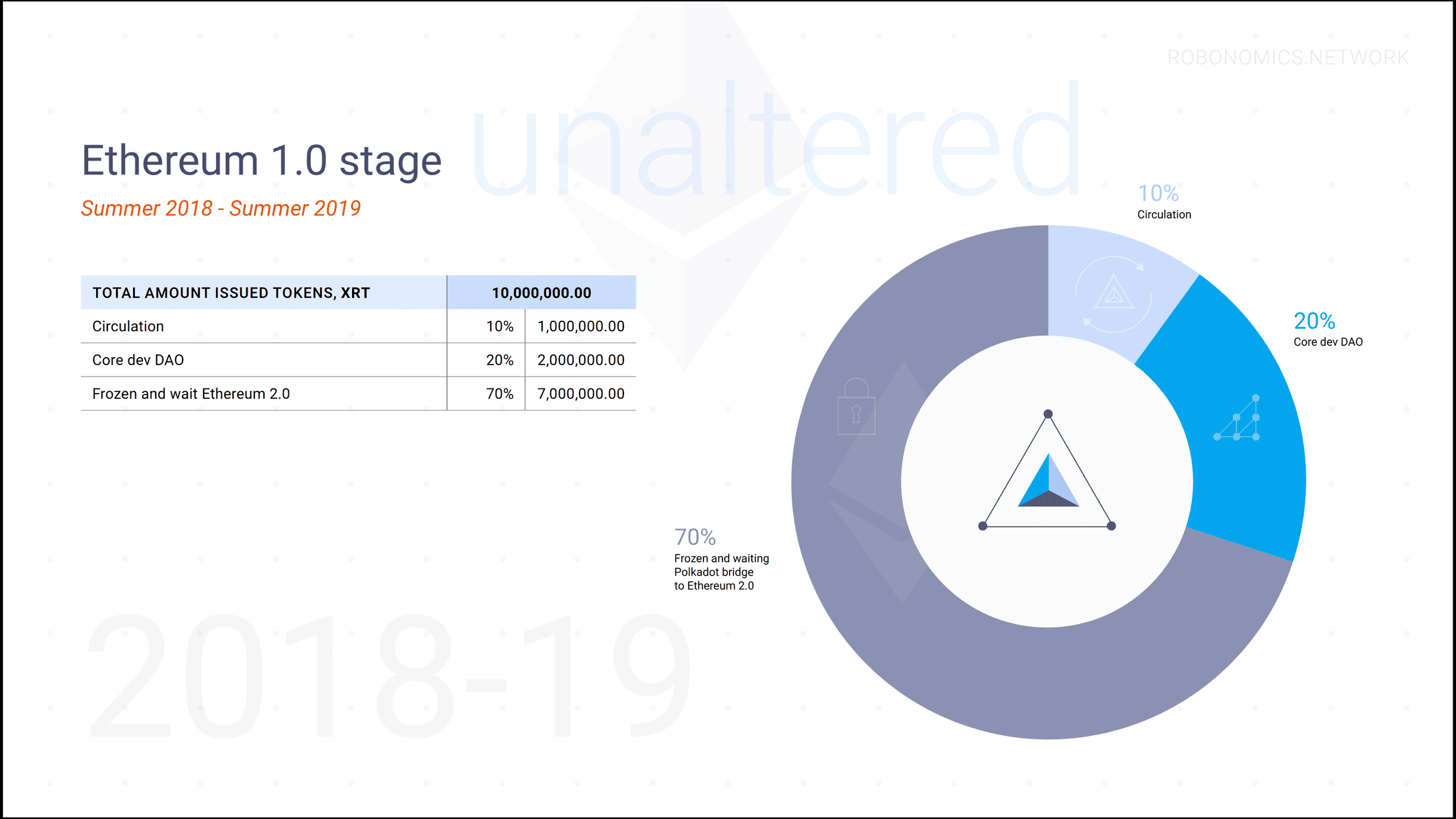 It was a difficult time for us, we lost some of our dear project participants, and every month the situation did not get easier. Fortunately, work on Robonomics continued to be maintained by a group of 5-6 developers. That year, we decided to try out a new blockchain, similar (but a little different) to Ethereum 2.0. This blockchain was proposed by the Parity team, who were already familiar faces for the entire Ethereum community, and it was also led by Gavin Wood. That is how we started working on the Robonomics implementation for Polkadot.

By mid-2019, the Robonomics development team was one of the first to launch their own network/blockchain on Substrate. And by the spring of 2020, the implementation of Robonomics for Polkadot already had almost all the basic functionality that we wanted to present to the crypto community before entering the IoT market. We worked without money for several years, eating Chinese noodles and drawing diagrams.

Then a small miracle happened...

The emergence of a large-scale DeFi segment (in particular, Uniswap in 2020), the interest of the entire crypto community in Polkadot projects, and the presence of an existing Ethereum-based tokenomics have moved interest in XRT off the ground.

The community has grown substantially by 2021 - the number of holders of XRT tokens has multiplied compared to 2017, the token began to be traded on many exchanges. Around Robonomics, life began to boil, the project continued its development after the crypto winter. Today it is important to focus on the future for the entire community, and not on trying to implement the plans of 2017 after 5 years. Thus, the question arose: what to do with 70% of the initial emission, which has turned into a sword of Damocles for the entire community?

During the last week of August (August 28-September 3), be ready to participate in the discussion and voting with XRT tokens on the development of the project for the first time.

The article you just read refers to the accompanying information for voting on the issue of burning 7 million XRT tokens. Below are 4 more votes that the DAO of developers offers to the community and which I will talk about in the next post.

Questions for the community:

Robonomics already lives on top of two networks. We will vote in the most convenient ways for Ethereum and Kusama. In the case of Ethereum, we chose Snapshot, and in the case of Polkadot, the native Governance v1 referendum mechanism will be applied.

After around a month, an XRT holder will be able to vote for or against. The weight of the vote will be proportional to the number of tokens on the account’s balance. At the end of the month, the values of the two votes will be summed up - if 51% of the total number of voted tokens is “for”, then the entire balance of the Dutch auction contract will be sent to the furnace (burnt). If 51% of the votes are “against”, then we will explore other options to determine the further distribution of the tokens from the auction balance. Or, perhaps we will hold an auction of 7 million tokens on the day of the launch of Ethereum 2.0, as we planned 5 years ago, but in all likelihood in 2032 😄